How Long Does a 1 Lb Propane Tank Last on a Gas Grill?

A compact propane tank facilitates a safe and easy outdoor cooking method because it can be deployed instantly without the messiness associated with other fuel sources like wood or charcoal. You can also move it to fit your dynamic circumstances, and they don’t need permanent piping and fixtures like natural gas. It also gets depleted quite fast and might catch you by surprise when you have hungry guests to feed.

Unfortunately, most propane tanks don’t come with a gauge to let you know how much fuel is remaining. You might find yourself in a situation that forces a trip to the store in the middle of cooking if you can’t accurately estimate your fuel consumption.

We are about to share a breakdown of the variables that influence the gas consumption rate so that you can estimate how long a pound of propane will last on a gas grill. This will help in planning and budgeting, ensuring you don’t run out of gas in your propane cylinder halfway through your barbecue. The pound of gas in your small propane tank should also serve as a reference point for your different cooking needs.

So, how long does a 1 lb propane tank last on a gas grill? Read on to find out.

How Long Will 1 lb of Propane Last on a Gas Grill?

A standard 1-lb propane tank will typically provide approximately 1½ hours of cooking time on high heat. However, this is not the full story as circumstances will cause variation in the gas consumption rate, which you should also be aware of.

This is a measure of the total heat output and fuel consumption per hour (it can also be measured in megajoules). It is defined as the amount of thermal energy that is required to raise the temperature of one pound of water by one degree (from 39°F to 40°F).

When applied to a gas grill, it is a fuel efficiency rating; it measures the amount of heat the gas grill will generate at its maximum output. Liquid propane has more BTUs (2,500) per cubic foot than natural gas (1,000)

While gas grills with high BTU ratings generate more heat per unit of propane, they also use more gas. You should know that a high BTU rating doesn’t mean a hotter grill automatically. The propane grill design also influences how the heat is distributed and contained.

Some efficient grills with lower BTUs cook faster, and extreme BTU ratings might be an effort to compensate for poor craftsmanship by the manufacturer (This is a complete topic on its own that we won’t get into today).

Consequently, the higher the BTU rating, the faster your 1lb of propane will be depleted. BTU is measured per burner, but the listed BTU can be in reference to a single burner, or it can be a combined BTU of all the gas grill’s burners, including the side burners.

Manufacturers like to list the combined BTUs for all the grills because it’s a more impressive number for selling grills, so you should confirm what your listing represents before you make your estimations.

The more BTUs a gas grill uses per hour, the faster it will burn through the propane. This is one of the things you should consider when purchasing a gas grill. The gas grill’s BTU per hour rating is usually included in the product specifications by the manufacturer.

You will find it in the owner’s manual or manufacturer’s website. It measures gas consumption, not the gas grill’s output, and can estimate how long the propane tank will last on a gas grill.

A pound of propane contains between 21,500 and 21,600 BTUs of potential heat. Divide this by the BTU per hour rating of your gas grill, and you will be able to fairly approximate the number of hours the tank will last.

A full 1lb propane tank on a simple home-use grill with a 15,000 BTU per hour rating should yield approximately one and a half hours of cooking time at maximum output.

The Number of Active Burners on the Gas Grill

Modern gas grills come with multiple burners for expanded cooking surfaces. The primary cooking area alone might have as many as four burners. Each burner has its own fuel demands, so the more burners are utilized, the faster your propane will be depleted.

BTU ratings are sometimes reserved for the primary burners found directly beneath the cooking grate. The fuel consumption in such grills will deviate significantly from the rating if they have active side burners, smoker burners, or rotisseries. This is why you should confirm what is included in the rating from the manufacturer.

Gas grill burners also come in different sizes, some with larger diameters than others. Burners with large diameters generally have a higher BTU per hour rating, so they will demand more from the propane tank than smaller burners.

If your gas grill only has one large burner or multiple burners, which cannot be controlled individually, 1lb of propane gas will be depleted sharply, and you won’t be able to regulate it. Gas grills with individually controlled burners of different sizes provide the most versatility, enabling you to optimize fuel economy.

The propane tank will last longer than its listed BTU hours when cooking at lower temperatures because the grill will not be operating at its full capacity. Most of your grilling is not done at the highest temperature setting, which gives an allowance from the BTU listed.

This is how propane turns from liquid to gas so your gas grill can use it. The liquid propane draws heat from the walls of the cylinder to reach its boiling point so it can transform into gas form.

Vaporization occurs when you turn on your appliance (in this case, the gas grill), which relieves some pressure from the cylinder. Propane has a low boiling point of -44°F, so it must be kept under pressure to maintain the liquid form. Each time the pressure is released, it boils and turns to gas for your grill.

LPG vaporization rate also drops as the liquid propane gets depleted. This is because the area in contact with the propane tank also reduces the amount of heat drawn in.

Therefore, a propane tank has a lower vaporization rate when the temperatures are low and when the propane level is lower. This might extend its cycle but will also affect productivity. The gas grill might not function optimally if the pressure is too low.

You might notice that your propane is getting depleted much faster than you estimated. This might be due to small leaks that might escape your notice. LP gas is heavier than air, meaning it stays low and won’t rise to your nose level, so you might miss the leak. These leaks are not just wasteful but are also quite risky, considering you will be using them around flames.

You should immediately shut off all valves, extinguish flames and turn off torches and equipment if you catch even a whiff of propane. This is typically a consequence of leaky hoses or faulty valves.

Use soapy water to inspect the tank, its nozzle, and the connection with the gas grill for leaks. Inspect them visually for damage and wear. Once you get the source of the leakage, you will decide if it needs to be fixed or replaced. 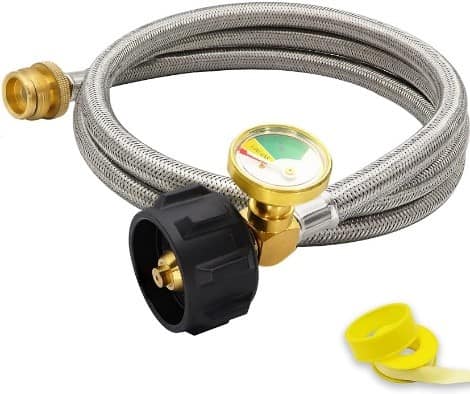 These variables mean you can’t be 100% accurate in estimating how long your 1lb propane tank will last on a gas grill. As much as you are now capable of estimating its cycle, it is good practice to have a backup plan for those instances where you will run out of gas in your 1lb propane bottle a bit earlier than you had anticipated. There are different ways of doing this.